Every big march has a personality and a mood. The 1963 March on Washington, where Martin Luther King Jr. declared, “I have a dream,” was the friendliest large crowd I’ve ever been in, with warmth and smiles and easy conversation among strangers—except during Dr. King’s speech, when the hundreds of thousands on the Mall fell quiet under the cadence of his hopeful appeal to the conscience of America.
The November 1969 demonstration by the New Mobilization Committee against the Vietnam War, mostly grim and peaceful, disintegrated late in the day as militants in the Weather Underground threw rocks, bottles, and paint at the ground-floor windows of the Justice Department, and then at police officers who replied with volleys of teargas and nightsticks.
The 1995 Million Man March, billed as a demonstration of atonement and renewal by African-American men, was conducted in an air of firm, morality-driven conviction and contemplation as speaker after speaker confessed, apologized, pledged, cajoled, preached, and promised.
The 2017 Women’s March, the day after Donald Trump’s Inauguration, displayed all the difficult emotions of that moment for those who decried his election: defiance, bitterness, resentment, resolve—but with a tincture of dry wit represented in the hand-made pink pussy hats worn to mock Trump’s boastful claim to a pussy-grabbing habit.
Today, the March for Our Lives in Washington was different. There was some wit in the signs, to be sure (“Trump Loves NRA Because It’s Easy to Spell”), and some laughter from the cramped crowds of teenagers and younger kids, of teachers and parents and other adults from the graying and limping to the lithe. We weren’t all solemn all the time. Just most of the time. It didn’t take a big push to get us to the edge of angry tears. 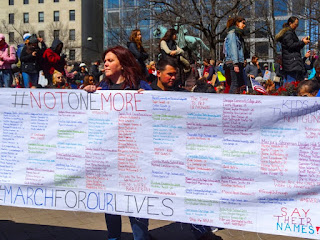 If President Trump doesn’t get us into an all-out war on the Korean Peninsula or elsewhere, his lurching and staggering on the world stage might have the long-term benefit of inducing other countries not to take the United States so seriously. This would look bad from inside the Washington Beltway, where American power to influence the globe is exaggerated, but it could have an upside in certain situations.
For better or worse, the United States has been decisive, as in World War II, when its reluctance to enter the fight allowed Nazi Germany to overwhelm continental Europe, drive Britain back on its heels, and pummel the Soviet Union on the Eastern Front. Instead of opening a second front, the United States sent aid that included canned beef stew. For decades afterwards, Russians sardonically called canned stew “the Second Front.”
Combined with Soviet forces, the U.S. entry into the war, after the 1941 Japanese attack on Pearl Harbor, was pivotal to its outcome, as we know, and the postwar order in Europe, particularly the NATO alliance to balance Soviet expansionism, was a creature of American leadership. In addition, before the Trump administration, Washington promoted human rights and pluralistic democracy where they suited American interests, which arguably tempered some authoritarianism.
But in its anti-communist fervor during the Cold War, the U.S. also demonstrated dramatic hypocrisy by meddling in foreign elections, turning a blind eye to rights violations, and even installing rightwing dictatorships. As Lord Acton observed, “Power tends to corrupt, and absolute power corrupts absolutely.”
It could be, then, that President Trump’s current lack of foreign policy, for which he has been so roundly criticized by specialists, is a good thing. It might be better than a hawkish alternative promoted by the hardliner Mike Pompeo as the next secretary of state.

Read more »
Posted by Dave at 1:37 PM No comments: Links to this post

The Faces of Children

You could not look away from the grim faces on the front page of The New York Times this morning. They were students in Parkland, Florida, who returned to classes two weeks after their school became the latest memorial in America’s litany of shootings.
Their hollow gazes chilled me in a special way, because they wrenched me back to a picture I had taken 45 years ago of Cambodian children about two weeks after their village of Neak Luong had been mistakenly bombed by an American B-52. The huge bombs had marched through town leaving enormous craters like the footprints of some giant, smashing most of the hospital, obliterating fragile houses, killing and maiming parents of children and children of parents.
Unlike most kids I’d met elsewhere in Indochina, these youngsters of Neak Luong did not crowd curiously around an American to grin and laugh into his camera. They stood silent and unsmiling, their faces impassive from torment—just like those Florida kids—as if the reverberations of shellshock had not yet died away. And perhaps never would.
The eyes of the tallest girl in my picture haunt me still. She is probably about 12 years old. She looks straight into the lens, but vacantly, without guile or passion. Her stare seems neither angry nor fearful but emotionally flat, like a veil across a wound.
In the center of today’s picture, too, is a Florida girl whose downcast eyes, in shadow, should not ever be forgotten. She looks broken. Her head bends slightly forward; she might be carrying a red flower, just visible between two teenagers in front of her. She seems about to weep—for all of us.