Looking For a Political Bell Curve

Here is a simple illustration of what’s wrong with Congress. The graph below, plotted from an assessment of Senators’ voting records by The New York Times, shows the deep chasm in the moderate middle where bipartisan compromise and true governing can take place. Both Democrats and Republicans are clustered far outside that center, making negotiation on major issues difficult. We have just seen a result of this in the stalemate over immigration. 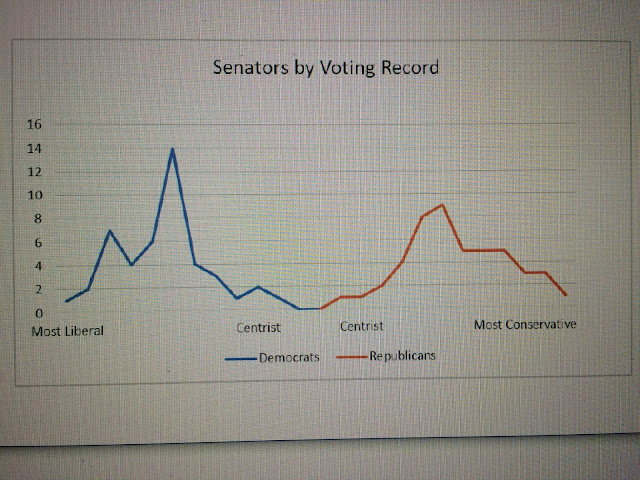 Voters of various stripes will surely look at this and say, well, I’d like even more Democrats to shift to that liberal left, or I’d be pleased to see more Republicans at the far right of the graph. Fine. When we get to the ideal world, count me in the first group. I’d be glad to see a more liberal, or “progressive,” drift. But the country isn’t built that way, and it cannot be led effectively from either end of the spectrum, or with the current barbell-shaped political distribution. We need a traditional bell curve, where the line bulges in the center and tapers off at both extremes.
Around that central axis there would still be sharp disagreements between Republicans and Democrats over the size and function of government, the regulation of business, the environment, immigration policy, budget priorities for the military versus social benefits, the makeup of the judiciary, and other matters. But more members of Congress clustered near the center would indicate less dogmatism and more flexibility; they might even be willing to listen seriously to the other side’s arguments.

As things stand, bipartisanship doesn’t mean compromise. It means opponents getting just about everything they want and giving up practically nothing. If it leaves hundreds of thousands of “Dreamers” in limbo, so be it. If it explodes the deficit, as the spending authorization passed last week will do, no problem.
The Republicans cut revenue by enacting big tax cuts, then raised spending by joining with Democrats to increase funding for everybody’s favorite causes, from military and border security on the right to domestic social welfare programs on the left. In the kind of expanding economy that we have today, this could be an expensive gamble. It looks to many economists like a prescription for inflation and therefore tighter money with high interest rates. The stock market took note and trembled.
Only the conservative fiscal hawks cried foul, and they would have had more credibility had they not voted against the revenue side of the balance sheet in the tax-cut bill. You don’t need a balanced budget to be financially responsible in government—in fact, heavy borrowing at low interest rates during an economic downturn would have been prudent timing, and the congressional Republicans shouldn’t have opposed it. But now that rates are likely to rise and the economy is heating up, they go into an orgy of borrowing so they (and we) can have what we don’t want to pay for.
In a bizarre paradox, President Trump submitted a slash-and-burn budget that would go counter to the tax-cut and spend-more bills that he had just signed. He and his radical right budget director, Mick Mulvaney, are doing their best at dismantling much of the federal government, especially the non-security agencies that protect Americans and enhance their lives in myriad ways.
Since Trump is a clumsy, erratic figure who inspires disarray, his budget has already been dismissed as a figment of his worst imagination, a proposal that cannot pass. Yet its main themes appeal to that hump of Republicans way to the right of center. Many of them know that if they don’t take a hard line against programs providing food, medical care, housing, and other protections for the poor, and if they waffle on gun control, abortion, immigration, or other wedge issues, they will face strong primary challengers on the right.
The Democrats this year confront similar problems on the left, where pro-immigration activists are already dismayed at the Democrats’ willingness to pass a spending bill without resolving the crisis looming over some 800,000 “Dreamers”—the young people brought by their parents illegally to the US as children. The waiver on their deportation issued by President Obama has been set by Trump to expire March 5.
Trump keeps changing his position, but this week he is demanding a bill containing his “four pillars” of immigration reform: eventual citizenship for the Dreamers, an end to the lottery system that favors immigrants from underrepresented countries, an end to family unification (“chain migration”) through immigration, and billions for the border wall that Mexico would definitely pay for under Trump’s campaign promise. This four-point bill of extreme demands got only 39 votes in the Senate.
The problem of decades remains: The middle ground on immigration looks unattractive to most Democrats and a good many Republicans, especially those vulnerable to primary challenges from the left or right respectively.
Senators are less susceptible than House members to parochial politics, since they don’t come from gerrymandered districts where primaries, not general elections, often determine who goes to Washington. If the Supreme Court rules this term that districts drawn to favor one party or another are unconstitutional, more heterogeneous districts might result, forcing candidates from both parties to navigate toward the middle.
That would affect the House and state legislatures. To change the US Senate, you’d have to redraw state boundaries—a whimsical notion indeed. A more uplifting effort, by American voters generally, would be to cultivate a common ground of tolerant compromise where better qualified citizens would be eager to run for office and, once there, arrange themselves in a bell curve of mutual respect. It’s not too late.