Terrorist Plots, Hatched by the F.B.I.

THE United States has been narrowly saved from lethal terrorist plots in recent years — or so it has seemed. A would-be suicide bomber was intercepted on his way to the Capitol; a scheme to bomb synagogues and shoot Stinger missiles at military aircraft was developed by men in Newburgh, N.Y.; and a fanciful idea to fly explosive-laden model planes into the Pentagon and the Capitol was hatched in Massachusetts.


But all these dramas were facilitated by the F.B.I., whose undercover agents and informers posed as terrorists offering a dummy missile, fake C-4 explosives, a disarmed suicide vest and rudimentary training. Suspects naïvely played their parts until they were arrested.

The cleanest, most honest way to oppose Arizona’s draconian immigration law is not the way it’s being done in Wednesday’s oral argument before the Supreme Court. It would be to oppose all local police involvement in federal immigration enforcement, including two programs that have been expanded by the Obama administration. They have led to just the kind of error and profiling feared by critics of the Arizona statute.

But profiling is not on the Court’s agenda, although it’s been raised in amicus briefs. The question at this stage is one of federalism, whether federal immigration law implicitly preempts the states’ powers to legislate in this area. Congress included no claim of preemption in the relevant law, so it’s up to the justices to decide whether there is implied preemption, a concept not warmly embraced by states-rights conservatives.

That is an important constitutional issue. But for swarthy people with foreign accents, the more practical, everyday matter—which will surely be litigated if Arizona’s law is upheld—is the license given to local police departments to stop and question and detain people on the basis of hunches and guesses that translate into racial and ethnic profiling. Many of them may be U.S. citizens and legal residents.

If Secret Service agents hadn’t infatuated the American press last weekend by cavorting with prostitutes in Colombia, there might have been space and time for newspapers and broadcasters to dwell on a more significant event that took place, also behind closed doors, at the Latin American summit. It was the discussion about partially legalizing narcotics to undermine the lethal drug cartels that have turned parts of the hemisphere into war zones.

This is not about to happen, obviously. As a politician in an election year, President Obama naturally rejected the idea. But the leaders—pushed by President Juan Manuel Santos of Colombia, President Felipe Calderon of Mexico, and President Otto Perez Molina of Guatemala—did order up a study by the Organization of American States. Desperation about drug violence has driven the decriminalization proposal to the highest levels of certain governments.

The arguments for and against legalization are familiar, but there is one in favor that has rarely been made: The war on drugs has also been a war on the U.S. Constitution, especially the Fourth Amendment’s guarantee of “the right of the people to be secure in their persons, houses, papers, and effects, against unreasonable searches and seizures.”

It’s not often that a two-word question can shake a country’s self-regard as deeply as Mike Wallace’s to Private Paul Meadlo, the soldier he interviewed about the My Lai massacre. 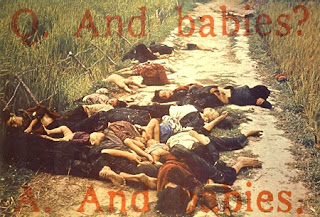 It was a pivot point in Americans’ downward trajectory of honor during the Vietnam War. Something snapped. The struggle to disbelieve the emerging story was now impossible to sustain. No longer was it inconceivable that a U.S. Army platoon had walked into a South Vietnamese hamlet on March 16, 1968, rounded up villagers, herded hundreds into a ditch, and gunned them down.

I recently asked a class of undergraduate journalism students what they remembered about September 11, 2001, since most of them were only eight or nine at the time.

Nobody chose to answer except one young woman, who said that she remembered her parents’ reactions. She did not elaborate, but it seemed that what stayed with her, more than the scenes from lower Manhattan, were the faces and voices of her mother and father.

Inevitably, as generation supersedes generation, that clear and terrible morning will be interpreted through the country’s reactions.